Another Windows Operating System? Why? 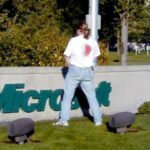 I really don’t understand why Microsoft keeps developing new operating systems. Windows is windows and each new version is loaded with bugs. And it usually comes out just as the previous version is becoming stable. Why does Microsoft do this? As a reseller, consultant and end-user, Microsoft has an impact on my business on a lot of different levels. I sell and support their products and I also use them. And as a user, I am very unhappy with the lack of innovation that comes from Microsoft. Like AT&T, we need Microsft to be split up so that competition and innovation can flourish.

But why do they keep creating new operating system? What purpose does it serve if we all have to buy it with every new computer? It’s not like we can go out and buy Linux and use it with Quickbooks, right?

Here is my theory. Microsoft dominates the PC software industry because they control  the operating system and they also control most of the mainstream applications. So, how are they able to do both? You would think that in a free-market Microsoft would have thousands of competitors nipping at their heels. In a free market, we would have dozens of word processor and spreadsheet programs to choose from. We don’t because each new operating system means that each application must be rewritten to be totally compatible. And since only Microsoft really knows their operating system, competing with Microsoft is impossible. How do you compete when the ground under your foundation keeps shifting?

Microsoft keeps the competition off-balance by rewriting the Windows Operating system every 2 or 3 years.

That’s my theory. Your comments are welcome.