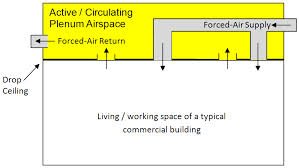 The plenum space is described as that section of the building that makes possible air movement for HVAC systems. It also provides the space for conduits of heated, conditioned and return air circulation. The distance between the structural ceiling and dropped ceiling tiles is regarded as the plenum space.

The plenum space houses communication cables for telephone and computer networks. However, increasing neglect of cables in plenum areas create a major risk in case of fire.

If the fire gets to the plenum space, air flow in this space may produce toxic fumes that can spread to the air circulation system and on to the other floors.

Plenum cable is regulated by the National Fire Protection Association Standard (NFPA 90A) in connection with the installation of air conditioning and ventilating systems. Materials designed for cables in plenum spaces must conform to severe fire safety test measures in compliance with NFPA 262 and summarized in NFPA 90A. This variety of cable is enclosed in fire resistant plastic sleeves. On the other hand, riser cable is the cable that runs between floors located in non plenum spaces. Plenum cables can replace the riser category but the latter can never take the place of plenum. Twisted pair, DVI (Digital Visual Interface) and co-axial cables are also produced in both categories.

The material can be low-smoke PVC or polyvinyl chloride (1987 patent). It can also be a fluorinated ethylene polymer. These Polyolefin formulations (polyethylene compound) were developed during the middle part of 1990. However, the compound was never used for commercial purposes. Research studies are still being conducted on other possible uses of these unexploited products.

Plenum cables go through a rigid manufacturing process and examined with awareness to guarantee that wires will not be the cause of or add fuel to a fire. There are plenty of materials that conform to plenum specifications. You can check market sources for the top commodities. The materials are required to pass stringent fire test specifications which is one reason for the higher cost compared to non-plenum (PVC) rated cables. As a general rule, these fire-resistant cables are two to three times the price of the PVC types. The plenum cable is quite complicated in terms of installation due to possible bending and twisting while installed. Besides, it is harder to strip than the regular PVC type.

Local and state codes will determine when Plenum Cable is required. Most states require plenum cable in plenum ceilings. PVC is only acceptible when the ceilings air return and distribution system is separate from the ceiling space. Separate air ducts and intake ductwork that will prevent the poisonous gases created by burning PVC will not be distributed throughout a non-plenum ceiling.

Progressive Office always takes great care to use the correct cable. Cheaper PVC is only used when permitted. And the savings are passed on to our clients.